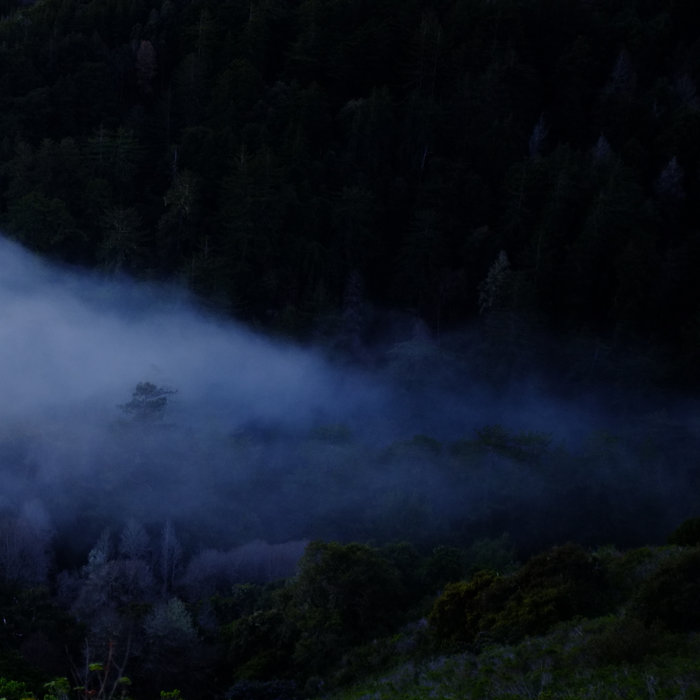 yogagirlsan This album is perfect for a meditation session. It takes you on a journey within, and allows you to contemplate what aspects of yourself you can let go of, heal from or encourage to grow. By the end of this album you feel as if you are emerging to hope, to light, and to a new beginning. Thank you for such beautiful music. Favorite track: Lime Creek Headwater Meditation.

Blair Buchanan Jonas is a remarkable talent with an amazing ear for melody. Keep it up!

Dark Watchers is a full-length ambient collaboration between experimental musician Jonas Bonnetta and virtuoso violinist Edwin Huizinga, written and recorded in situ during the pair’s seclusion at Big Sur.

Working among the coves and meadows that furrow the coast, Huizinga and Bonnetta fashion an album in which composition and field sounds dissolve into something like transcription. Crackling fire fades into a thicket of electronics, glassy piano blooms into the dawn chorus of the rare yellow-breasted chat, each delicate note plucked out and ramified into melody. Bass tones are braided into the patter of brook and tidal eddy, the harmony of light on the water decanted into the sound of Huizinga’s violin.

In Dark Watchers, the pair bend to their task like scriveners, as if the intricate arrangements of wind and surf and the convocated ghosts of the Santa Lucia mountains were notes which could be transposed, if only one might learn the tuning. Cut off from the outside world, away from the smog of social media and centrifugal mania of digital life, Bonnetta and Huizinga look for the music of tangible things.

The album is a reckoning of spaces in transition – the coast, the dusk, the final eclipse of life – and its two sides preserve the same formal tension. Side A draws on the haunted solitudes of Big Sur in the fading light, études of color rendered in circuits and strings; Side B invokes an oceanic darkness, bottomless and familiar. There, fragmentary voices rise in a murmur of half-remembered poems, rumors of speech like shapes seen through the surface of the sea.

The poetry of Robinson Jeffers in particular hovers over the record, his work a faithful companion during its creation. Jeffers lived his life on the coast, building a home called Tor House with his own hands in Carmel-by-the-Sea. The environmental music of that house, recorded there on the anniversary of the poet’s death, is woven through the album like a soft tattoo, the composers seeking, as Jeffers put it, “the wind-struck / music man's bones were moulded to be the harp for.”

In the legends of the Santa Lucia mountains, the Dark Watchers are shadowy figures, half-glimpsed and penumbral, that stand among the high peaks that slope into the sea. They must never be looked at directly. In the instant they are seen, they disappear into the landscape of which they are a manifestation. Dark Watchers is a record of the composers’ attempt to surrender completely to the same landscape, if only fleetingly.For in that moment one might see the filaments, wavering at some hidden pitch, by which each thing is fastened to every other.

Written and arranged by Jonas Bonnetta and Edwin Huizinga at Rancho Rico and Glen Deven Ranch in Big Sur, California in January 2018

Recordings in the field made on a Sound Devices Mixpre10-T with a pair of DPA 4060's, a Sennheiser MKH-416, and an Aquarian H2A hydrophone.

Made with the very generous support of the Big Sur Land Trust.

Bandcamp Daily  your guide to the world of Bandcamp